The NGUI-MATRIX is a new, innovative, medical system that sets itself apart from both eastern and western medicines. While it has some similarities with both traditional Chinese medicine, as well as western medicine, it utilizes a holistic approach to the patient’s subconscious mind in order to effectively minimize or moderate pain and other common ailments. The NGUI-MATRIX system is to be taught at a series of medical workshops across North America by its founder, Grandmaster Stanley Ngui.

In today’s blog post we will be discussing one of the principal influences of the medical system — Qigong.

Qigong is a Chinese system of holistic body positioning, movement, breathing, and meditation technique that is used to promote health and spirituality. Qigong encompasses practical applications of Qi (“subtly breathing” or “vital energy”) as well as Gong (“a skill cultivated via steady practice”). Qigong is different for everyone, as it allows the user to choose the applications of how they use Qigong, but it can be used for both personal and clinical gain. 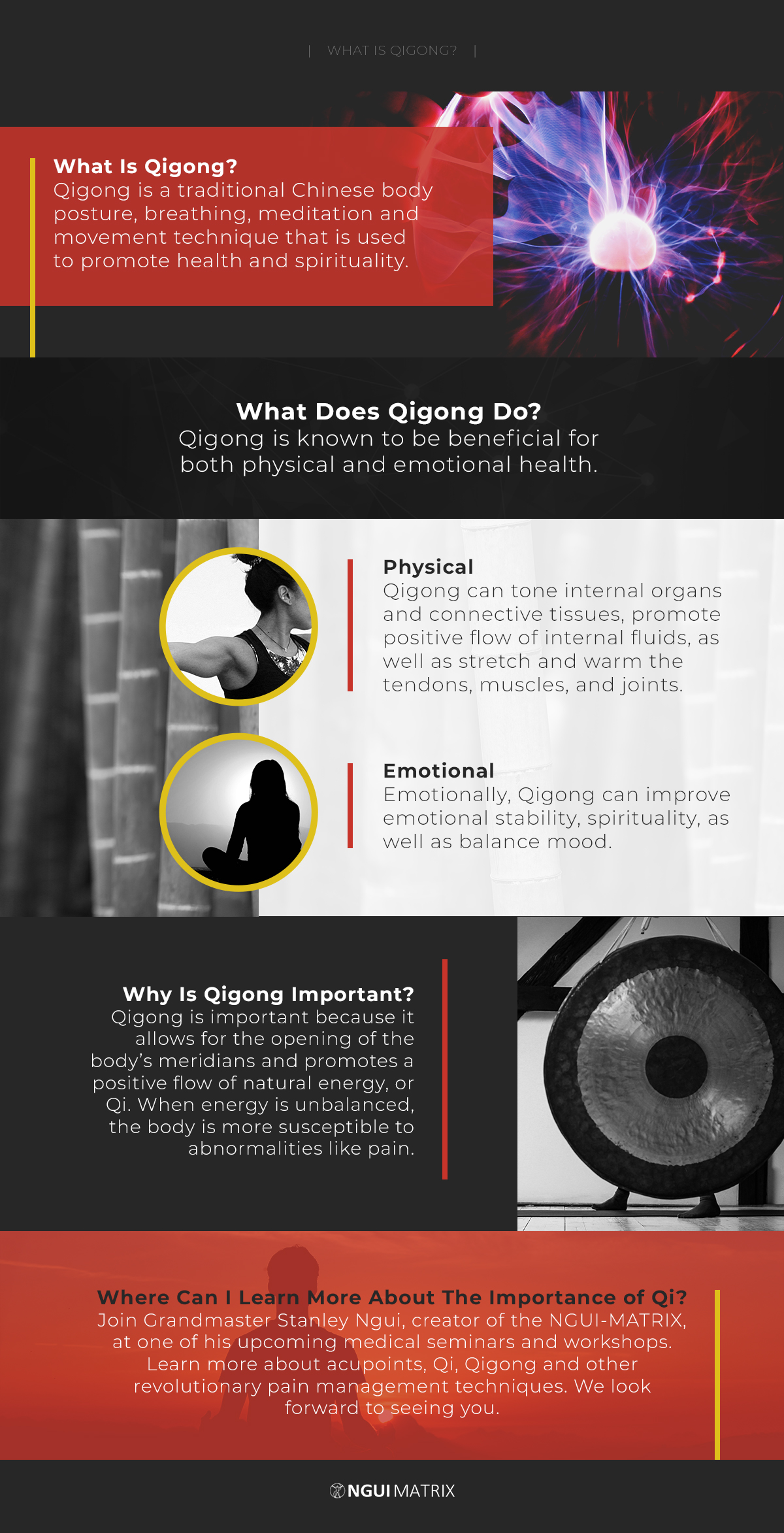 What Are The Benefits Of Qigong?

Qigong is well known for providing a multitude of benefits, but among the largest is that it opens the flow of natural energy. Natural energy flows along acupoints in the body, often tapped into by the use of acupressure or acupuncture, and Qigong is the practice that aides in promoting positive energy flow throughout the body. Physically, Qigong can provide health benefits such as the warming of the tendons, ligaments, and muscles as a result of making the slow deliberate movements that Qigong is known for. Additionally, Qigong can tone your internal organs and connective tissues, as well as promote the positive flow of internal body fluids.

While Qigong is known to be positive for your physical health, it should not be forgotten that it too can have positive effects on emotional health. Regularly practicing Qigong can result in mood improvements, emotional stability, and spirituality. While this act of energy balancing may seem like a hobby, rather than a clinical application, it can be used in both.

What Are The Different Types Of Qigong?

Qigong is known to be an asset in many different types of cultivations, as correcting the balance of natural energy in a body can do many things, but there are four main applications that most Qigong can fit into. Below, we have briefly outlined each of the four applications, as well as a summation of what the application encompasses.

What Does Qigong Have To Do With The NGUI-MATRIX?

While Qigong is not technically a part of the NGUI-MATRIX curriculum, it is, in a sense, related. An important application of the NGUI-MATRIX is the utilization and ability to move Qi, or functional energy, in an effort to rebalance yourself. Because of this, it is important to at least understand the broad concepts of Qigong, as it is one of the most effective methods in moving and balancing one’s Qi.

If you are interested in how to use Qi as complementary and alternative medicine, or as a health and wellness tool, we urge you to attend one of the upcoming NGUI-MATRIX medical workshops. Stay tuned to our website for upcoming medical conference and medical workshop dates in your area. We look forward to working with you!

Learn More About The NGUI-MATRIX