Substance abuse and illegal drugs have always been a problem in Canada, but there is no doubt that the prevalence of opioid-related health issues has skyrocketed in recent years. Opioids are a dangerous drug to become involved with, and they no longer just affect the people that take them, as entire communities can become damaged by a loss. Since 2016 alone, over 8,000 Canadians and counting have died as a result of an opioid-related injury or overdose. But why is Canada seeing a crisis of such magnitude?

What Is The Opioid Crisis?

While it might seem like a simple black and white issue, the opioid crisis in Canada is a complex public health issue that is influenced by a great number of factors. One of the largest causes of opioid-related issues is the over-prescription of opioid drugs by medical professionals. While it might seem like we are saying medical professionals are not doing their job, this is not true — instead, we are simply saying that for many years, it became the industry standard to prescribe opioids in large amounts to treat a great number of symptoms like general pain.

In addition to the systematic implementation of opioid addiction caused by the over-prescription of medications, there are a great number of issues that stem from illegal activities. In fact, a majority of North America is affected by the flooding of synthetic opioid-based drugs like fentanyl and carfentanil into communities.

When looking at the current issues that Canada is having with opioids, it is important to think about where the issues are coming from. Opioids can be legal and illegal, but what makes illegal and legal opioids similar is that they can both be abused. Legal opioids are drugs that have been prescribed to you after a doctors visit, surgery, or dental procedure, and illegal opioids are drugs that have been given to you by anyone other than your healthcare provider. Some of the more commonly abused opioids are:

There are a great number of opioids ranging from codeine to methadone to meperidine, and more. In fact, it would take us all day to list all of them. The one thing that they all have in common, illegal or legal, is that they are highly addictive and dangerous if not properly administered — being why over 8,000 people have died from opioid-related deaths since 2016.

The Effect Of The Opioid Crisis On The Canadian Healthcare System

The Canadian opioid crisis has quite the grasp on the Canadian healthcare system — and it is only getting worse. Not only does an opioid-related accident like overdoses put a huge stress on the healthcare systems as the number of cases grows, but it also shows the need for healthcare reform. Sure, not all opioid-related issues stem from prescriptions, as illegal drug use runs rampant, but the ease of getting an opioid prescription has, in fact, influenced the number of people that find themselves addicted or dependant on opioids.

In the below information graphic we have listed some of the more staggering statistics that have been released by the Canadian Institute of Health Information (CIHI). 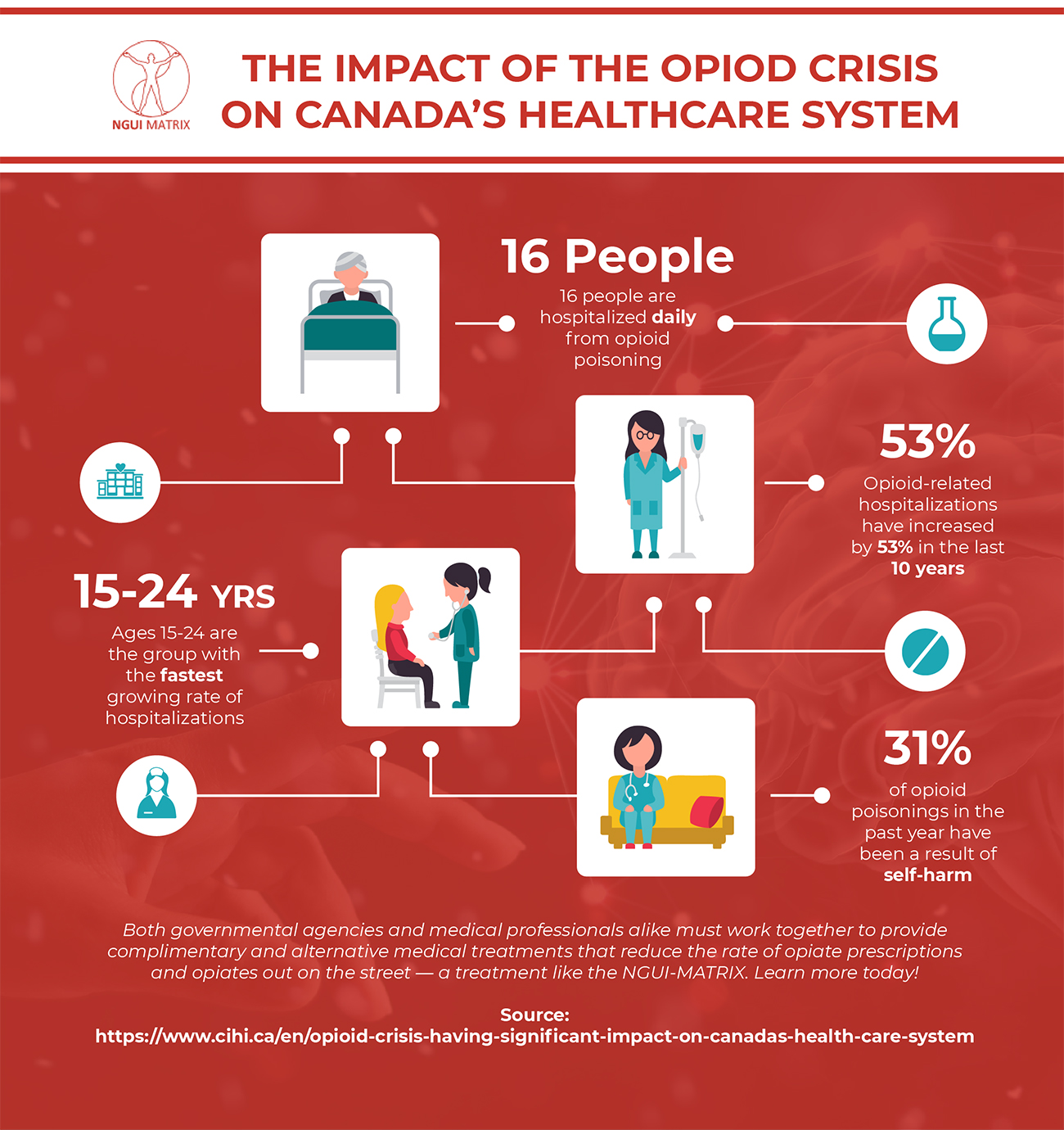 What Steps Can We Take To Lessen The Impact Of The Opioid Crisis In Canada?

The opioid crisis is real, and it can’t be ignored. In an effort to reduce the stresses that have been caused to the Canadian healthcare industry, it is important that people begin to make an active effort towards reducing the amount of opioid-related injury or death. But what can be done to do such a thing?

When it comes to illegal opiates, it is up to the government to stop the flow of drugs into Canada.  In fact, just days ago Prime Minister Justin Trudeau was quoted saying “China has been actually working with Canadian officials and Canadian law enforcement over the past months, to take measures on the flow of fentanyl into Canada,” Trudeau said. “There is, obviously, as you say, more to do. We recognize that this is a crisis that is continuing in Canada and indeed getting worse.”

When it comes to the flow of legal drugs, it is up to the healthcare industry itself. Medical professionals everywhere, just like you, must take active steps towards prescribing less opiate-based drugs for pain management and should instead seek complementary and alternative forms of pain management and pain treatment for their patients — a pain management treatment like the NGUI-MATRIX

The NGUI-MATRIX is a revolutionary new pain treatment technique that has been developed by Grandmaster Stanley Ngui. This pain management treatment technique is non-invasive and non-addictive — in fact, it simply involves the depression of acupoints on the affected person’s head to augment the brain and reallocate natural body energy along the body’s natural meridians. If you are interested in learning more about the NGUI-MATRIX, we strongly urge you to visit our website, attend an upcoming speaking event, or contact us.

We hope that the NGUI-MATRIX can be a valuable asset towards reducing the dependence of opioid prescriptions in the Canadian healthcare industry. We look forward to hearing from you and helping you do your part, as a medical professional, to reduce the dependence of the medical industry (and Canada) on opiate drugs.

Book Grandmaster Stanley For Your Next Event!